Following the success of Voices of the Earth, Elements was created. The collection was build around the theme of the five elements of Fire, Earth, Air, Water and Ether or Spirit. This collection was more focused thematically, and with a smaller group of carvers pushed the artistic envelope of each artist even farther.

The Genesis of Gem Cutting in America
By Martin Bell

The roots of gemstone carving may have been a human practice long before civilization. It all probably started with the first impulse to bore a hole in a bone or tooth or pretty pebble to make a bead…or to shape flint or stone to make a weapon…or to make a talisman. It may have started by scratching marks on rocks in an idle moment or as a fervent prayer.

There is evidence of carving gemstones as long as 7000 years ago and certainly the Hittites and Egyptians were engaged in the practice 5000 years ago. The Assyrians and Persians did work of great sophistication and the ancient Greeks raised gem carving to a high art. There was a resurgence of gem carving during the renaissance followed by a slow steady decline with a brief revival in the carving of figures and cameos by the Victorians. There are very few gem carvers working today, but some of the modern artists, working with better tools and an understanding of the physics of light, are surpassing anything done before in history.

In modern times there are four great traditions of gemstone carving in the world. Work of sublime beauty is produced in each.

1. The Chinese is the oldest and most culture bound.

2. Jaipur in India flowered under the Mogul emperors and is enjoying resurgence as a cutting center today.

4. The German community of Idar Oberstein has been a cutting center for many centuries and has set the standard for quality in fashioning gemstones in modern times.

There are talented artists working in all of these places and cutting centers have developed in other parts of the world also, catering primarily to the huge market for commercial stones.

Gemstone carving is a relatively new profession in the United States. There was no tradition or industry outside of diamond cutting until modern times and even now the people making a living at it can be counted in the dozens, primarily due to the very high cost of labor, although there are thousands of hobbyist rock hounds and faceters.

There has emerged a new and vibrant group of gem carving artists in America within just the last generation. Because there is no tradition of gem carving, available mentors were few and far between, and most of the American artists are self-taught and have developed in relative isolation. Many have even developed their own equipment and techniques. As might be expected, their work is as dynamic and creative and as varied as the American experience itself.

Right now we have a unique window of opportunity. Most of the “pioneers” of the new “American School” are still living and are in their artistic prime with over twenty years experience. Their art and craft and the techniques they have developed will form the foundation that the artists of future generations will build upon.

Because Paula Crevoshay has been working with many of these carvers for the last two decades, she has been privileged to be a keen observer of this exciting development. She has undertaken to create a special collection of the best work of a representative group of these artists on the theme, “Elements”. She knows that it is important that we make a record at this time, while we still can.

There are two basic categories of cutting with variations and hybrids. Faceting has moved far beyond the basic efforts to bring just symmetry and brilliance to the stone and carving is much more than adding a cameo or crest to a cabochon, although these time honored pursuits are being practiced with amazing precision and skill. A third, and entirely new category, is internal carving, which has been made possible by the advent of tiny diamond burs and power tools.

The exhibition has been many years in the making. After the gem artists accepted the challenge to participate in the exhibit they set about seeking appropriate material to cut their chosen themes among The Elements; Air, Earth, Water, Fire and Ether (or Spirit). Because the success of this phase can be determined by luck as much as by anything else, eight months was allotted. Five months was the target for execution with an allowance for later submissions of several months. There was also a more time consuming degree of collaboration between Ms. Crevoshay and some of the cutters than with others, which sometimes added several months to specific projects. The design of the jewels, and the acquisition and cutting of the accent stones, took another six months and overlapped with the actual fabrication which took almost a year.

The resulting collection shows the incredible range of techniques and virtuosity of the cutters and the amazingly rich array of gem minerals that are available today for their expression. We hope that you enjoy the fruit of this concerted effort.

Among the few dozen people making a living exclusively from gem carving there are others who would also be worthy of inclusion in this exhibit. That said, there is no question that these artists represent the cream of the North American gem cutters today. 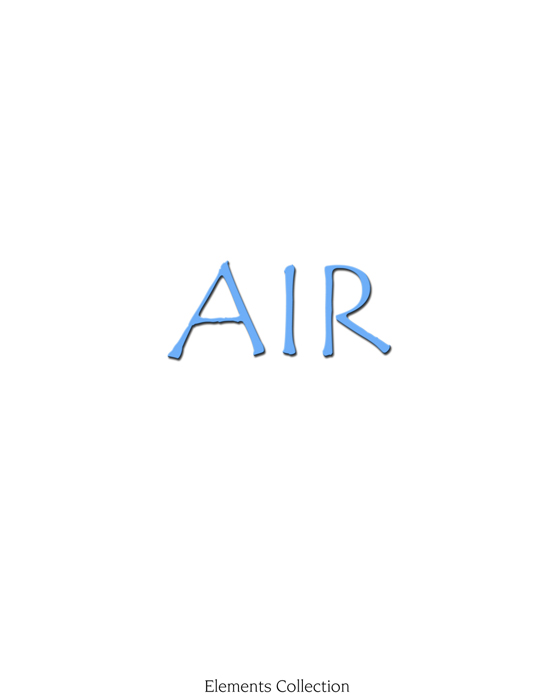 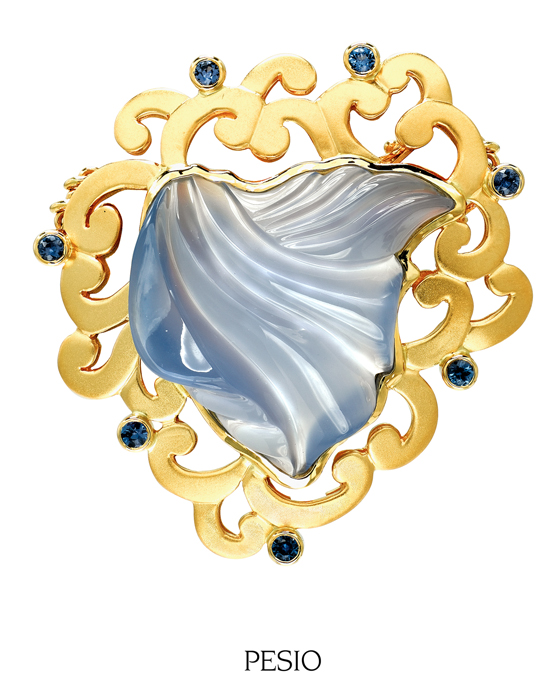 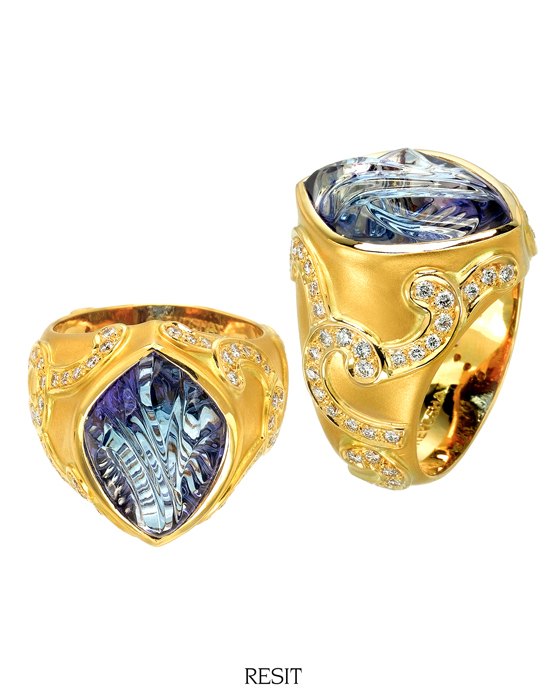 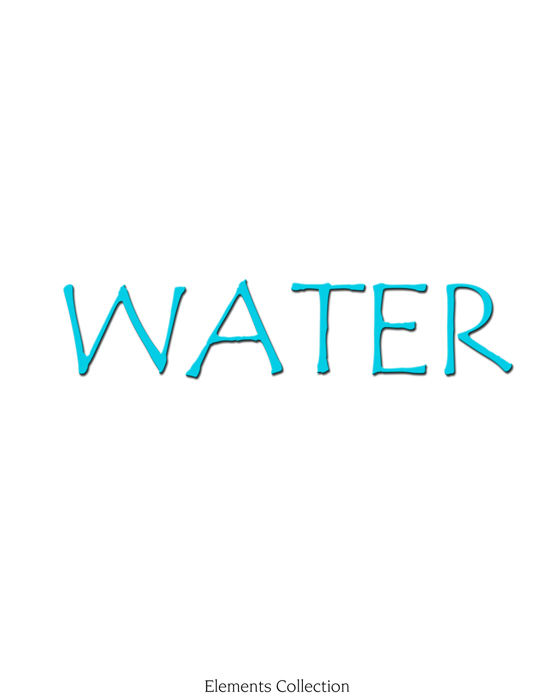 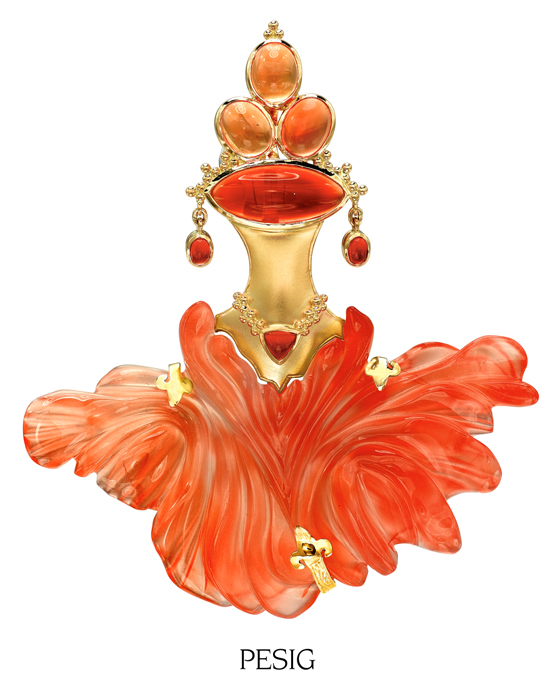 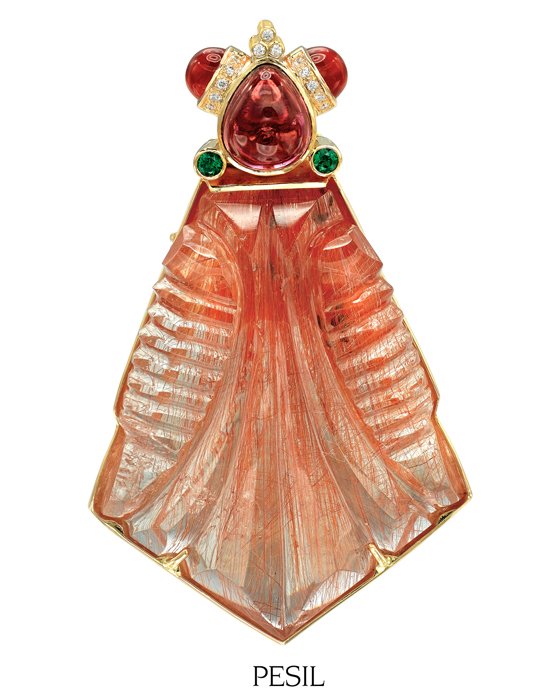 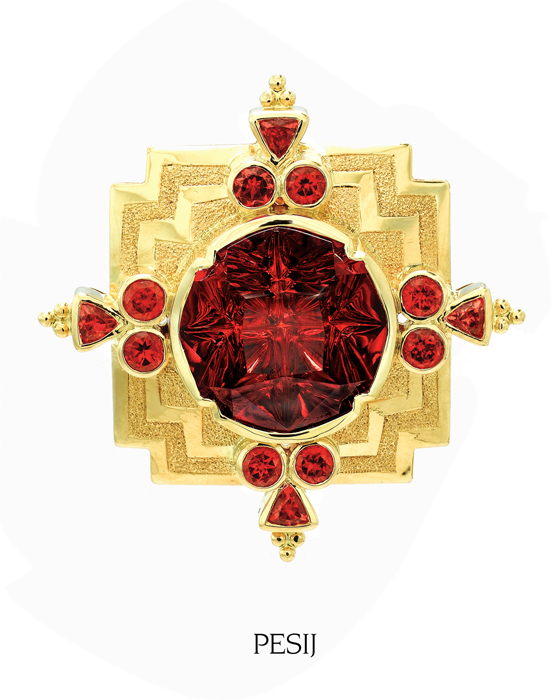 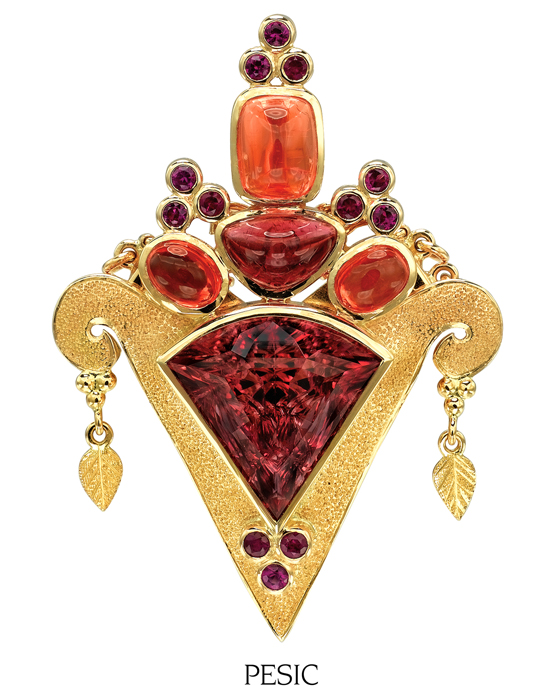 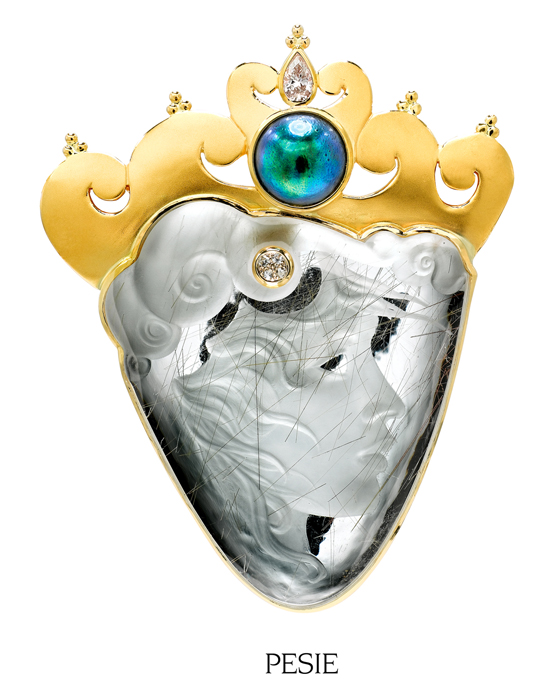